Have you heard about the newest malady to affect the iPhone 6 and 6+?  It is something dubbed the “Touch Disease”, which affects the touchscreen of your iPhone.  You’ll notice a flickering grey bar and then your touchscreen will stop working.  This has primarily been impacting iPhones which are almost two years old.

This issue was reported by iFixIt on August 23rd in a blog post.  They did provide an image of the flickering grey bar at the top of the phone: 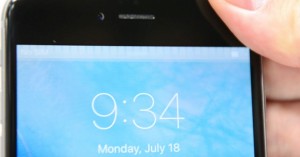 Gizmodo thinks the problem appears to be a part of the “Bendgate” issue:

“The iPhone 6 and 6 Plus flex more than other phones, which causes all of their guts flex too. The soldering beads connecting the chips to the logic board can’t handle the long-term repetitive stress of your back pocket”

“Weirdly enough, replacing the screen isn’t a proper fix. The gray bar will creep onto a new screen even when it’s been swapped out because that’s not where the problem resides. It’s a problem with the Touch IC chips inside the phone, which separate from the logic board in a manner similar to the one that some claimed caused Microsoft’s Xbox 360 red-ring of death. They must be replaced for the problem to completely go away, and Apple’s in-store Geniuses are not equipped to do that kind of soldering work. Hence, the quandary. In a YouTube video cited by iFixit, repair specialist Louis Rossmann predicts that this “touch disease” malady could turn into a class action lawsuit if enough customers make a stink. “

MacRumors assures us that:

“The iPhone 6s and iPhone 6s Plus are not affected by the same issue as Apple strengthened the body and changed the position of the Touch IC chips in those devices.”

Bottom line?  If your iPhone 6 or 6 Plus is still under warranty and you start to experience any of these issues, take it in right away for replacement. If it’s not, try not to store it in your back pocket or any place where it could flex easily.  Also, learn how to use Siri to open apps and to use its voice-to-text functionality. This may help tide you over until you can replace your phone or get the innards soldered properly.  Here’s a link to my blog on Top 10 Ways to use Siri.

And, I hope it goes without saying, but I’ll say it anyway!  Make sure you keep your iPhone backed up!