For years I’ve been hearing about the “Right to Repair” movement and didn’t pay a whole lot of attention to the issue. It seemed to primarily deal with farmers having issues with their tractors. Apparently, farmers were prohibited by some manufacturers from fixing their own tractors. If they did try to fix the tractor or to get an unauthorized mechanic to fix it, the manufacturer could send a signal through their internet software system to shut the tractor down entirely. Many farmers resorted to downloading Ukrainian software to get things working again. From an article in the Guardian:

“The majority of tractors today are internet-connected, and resolving errors requires special diagnostic tools that only manufacturers, such as John Deere, and authorized dealers have access to or are allowed to use. They often charge hundreds of dollars in call-out fees for repairs, which can take weeks to complete.”

Right to Repair your technology:

Fast forward to 2015 when customers started asking Chris to repair their iPhones. Because we’re not an authorized Apple dealer we couldn’t help them. If we even attempted to open the phone, the customer’s warranty would be voided! There have also been a few instances where Chris was repairing other Apple products and needed a replacement part. Apple refused to sell him the parts and Chris had to send the customer to the Apple store instead. Luckily, it’s easier now to get replacement parts for MacBooks and iMacs, but we’re still not able to help with iPhones or iPads. 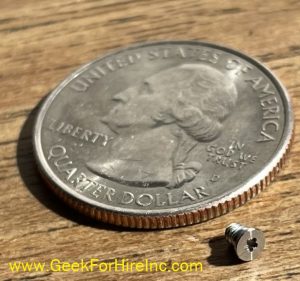 Another issue is repairability. When someone calls about a broken printer, I have to tell them they should just buy a new one. (Hardware problems. We can fix software and networking issues.) Printers are designed to be disposable. You can’t take a printer apart to fix it without breaking more components in the process. And if you’re careful enough to not break anything else, it will take hours to do. Sometimes even fixing a paper jam will fatally break a printer! (Some of the less-expensive laptops are like this too. They are put together with teeny, fragile, plastic micro-clips that are designed to break if you take the laptop apart.)  I have to tell our customers that it’s not very cost-effective to spend $300 to fix a $100 printer!

In doing a little more research into this issue, I read about hospitals that couldn’t get their equipment repaired in a timely manner during the past year. Hospitals had to go through the manufacturer who had huge backlogs. They couldn’t bring in a qualified but “unauthorized” repair person who could fix it more quickly and less expensively. Having access to repair manuals and parts would allow hospitals to repair the equipment themselves:

“Too many hospitals face long waits for authorized technicians to repair life-saving machines. In a survey published in July by the U.S. PIRG Education Fund, almost one-third of biomedical repair technicians said some equipment at their facilities could not be used because repairs were unavailable. To be clear, it isn’t just equipment needed for coronavirus treatment that’s impacted—preventative maintenance on all kinds of devices has fallen behind because manufacturer-certified technicians were unavailable. Everything from imaging equipment like MRI, CT X-ray, and ultrasound machines, to anesthesia machines, heart-lung machines, and other surgical equipment were affected.”

The Right to Repair doesn’t only impact farmers, hospitals, and computer repair companies. It takes its toll on regular people too. I read about Rob Oliver in Pennsylvania, who is paralyzed from the chest down. When the footrest on his shower chair broke, he reached out to the manufacturer. The part cost only a couple of dollars, but they wouldn’t sell it to him. They told him to purchase a new $1500 chair instead. Recently, I received an update from Rob:

The manufacturer “actually sent a tech out to install the new part, twice! The problem was that the manufacturer had sent the wrong part. After getting it wrong those 2 times, they then decided that they were not going to try to get the right part anymore. (The manufacturer decided, not the service provider.)”

Thank goodness the US government finally understands how the inability to repair a product you’ve purchased is a problem for individuals and across many industries.

It looks like all that may be coming to an end and consumers will soon have the right to repair any phone, car, washing machine, or shower chair that they purchase. The Federal Trade Commission issued a statement on July 21st saying that they would “Ramp up Law Enforcement Against Illegal Repair Restrictions”. Here’s a link to the full statement.

“The FTC has concluded that manufacturers use a variety of methods—such as using adhesives that make parts difficult to replace, (we’ve seen this) limiting the availability of parts and tools, (we’ve seen this too.) or making diagnostic software unavailable—that have made consumer products harder to fix and maintain….  In addition, manufacturers and sellers may be restricting competition for repairs in a number of ways that might violate the law.”

I’m not sure how long it will take for the FTC to enforce “Right to Repair”, but this is good news for consumers and independent repair people everywhere. 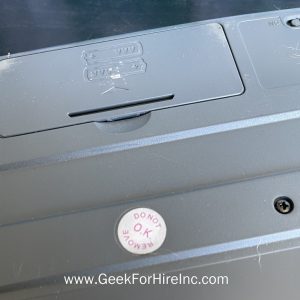 Not surprisingly, Apple, Tesla, and other companies are opposed to consumer’s right to repair products that they have purchased. When Massachusetts added an initiative to their 2020 ballot, Tesla sent an email to voters asking them to vote against it:

“As you go to the polls this fall, Tesla asks that you vote no on Question 1 … goes well beyond what is necessary … it potentially jeopardizes vehicle and data security. The requirements, pushed by two national auto shop lobbying groups, would make vehicles more vulnerable to cyberattacks and would make successful attacks more harmful.”

Steve Wozniak is all for the right to repair. The aptly named Repair Preservation Group recently interviewed Woz. He reminds us that:

“We wouldn’t have had an Apple had I not grown up in a very open technology world.”

Information About Geek For Hire, Inc.

Chris Eddy of Geek For Hire, Inc. has provided computer service to families and small businesses with Mac’s and PCs for the past eighteen years. Angie’s List and the BBB rate Geek For Hire very highly.  You can find more on our website, or give us a call at 303-618-0154. Geek For Hire, Inc. provides onsite service (Tier 3 support) to the Denver / Boulder / Front Range area and remote service throughout North America.