We’ve been hearing about Bitcoin and other digital currencies for years now.  For a long time these digital currencies were used primarily for people transacting business that they wanted to stay “under the radar”.  We didn’t realize that initially, and thought it would be cool and cutting edge if Geek For Hire could accept payment in Bitcoins.  Then when we wanted to be certified by the Better Business Bureau, they nixed the whole idea.  Bitcoins have come a long way since then.

First of all, what is Digital Currency? 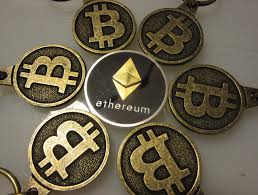 Digital currency is, essentially, virtual cash.  It’s not backed by gold or the full faith and credit of any government.  A good definition comes from Wikipedia:

“Digital currency (digital money or electronic money or electronic currency) is distinct from physical (such as banknotes and coins). It exhibits properties similar to physical currencies, but allows for instantaneous transactions and borderless transfer-of-ownership. Examples include virtual currencies and cryptocurrencies.[1] Like traditional money, these currencies may be used to buy physical goods and services, but may also be restricted to certain communities such as for use inside an on-line game or social network.[2] … Digital currency is a money balance recorded electronically on a stored-value card or other device.”

More recently, companies and individuals have been using blockchain software to create their own digital currencies.  This article describes how Robert Hackett, writing for Fortune magazine creates his own Petsdotcoin and why companies all over the globe are creating their own, as well.

If you’re looking for an analysis of current pricing for some of the major currencies check out CoinTelegraph.

But, in spite of (or because of) the success, and extended use of digital currencies, larger financial institutions are still threatened by them as evidenced by this comment by Jamie Dimon from JP Morgan.  (Read the full article here.)

“Bitcoin is a fraud that will ultimately blow up, according to JP Morgan boss Jamie Dimon, who said the digital currency was only fit for use by drug dealers, murderers and people living in places such as North Korea.   Speaking at a conference in New York, the boss of America’s biggest bank said he would fire “in a second” anyone at the investment bank found to be trading in bitcoin.”

In response, “Yann Quelenn, an analyst at the online bank Swissquote, said bitcoin “still has great potential” ….  “Cryptocurrencies are a new asset class, one at war with fiat [paper] money, and that war will be fought on regulatory issues. Central banks are keen to preserve their monopoly on money, something they will not let go of without a fight.”

We’ll be keeping an eye on Bitcoin, Bitcoin Cash, and other digital currencies to see where this goes.

I hope you found this interesting.  Let us know your thoughts in the comments below!

We’ve been using Amazon Prime for the past few years.  We like the free 2-3 day shipping and the online streaming. I haven’t tried the Kindle lending library yet.  I’ll try that next!   Prime is normally $99/year, but you can try it for 30 day for free by clicking on this link: Try Amazon Prime 30-Day Free Trial (Yes, we’ll get a small commission if you sign up.)