Several customers have wanted a new Apple Computer recently. Chris helped them with their purchases and learned a thing or two about the current Mac buying process.

About two months ago, I served a customer who has been a long-term loyal Apple person. He wanted to get the new Apple computer because his roughly 7-year-old iMac had become slow. He went to the Apple Store and got a new iMac. I prepped his new machine and transferred his data. I found it was slow at the time, and told him this. He said he would work with it.

About two weeks later, he called back, saying that his new iMac was very slow. I came to inspect the machine and confirmed that it was glacially slow. It was much slower than his previous iMac. I found that this beautiful-looking new machine, unfortunately, had an 8th generation Core i3 processor in it, which is slow, and a 5400 RPM physical hard drive, which is also very slow. These are important specifications that a “forward-leaning” company like Apple should not be selling. The machine he bought at the Apple Store is the kind of computer you want someone you don’t like to have.

I called the Apple Store where he bought the machine, and there was no answer after many calls. The call eventually rolled over to Apple Corporate, and after about 1-1.5 hours on hold, I was able to finally talk with someone at Apple Corporate.

I learned that Apple has a 14 day “no-questions-asked” return policy. But since the computer was bought from the store, rather than ordered through Apple Corporate, the return or exchange of the computer must be done through the store. Apple Corporate would not handle a return for a purchase made at the store. It was as if each Apple Store was independently owned and operated. This was not what we expected. 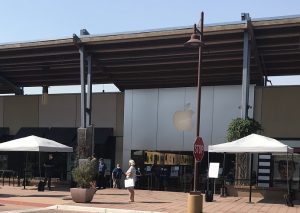 Also, it’s the “Time of Covid-19”, and the local Boulder Apple Store is closed, or at least not answering their phones. (At least four attempts were made.)

(In my opinion, this new iMac, which the customer had purchased by himself at the Store, was unworthy for him to keep because it performed so badly. This was a violation of the basic Apple premise of good performance from your computer. You expect to love any computer you get from Apple.)

We drove to the local Apple Store in Boulder and found that no one was inside. There was an EZ-Up popup tent on the sidewalk, with a couple of Apple people talking with citizens. There were marks on the sidewalk for social distancing. They also had two security guards there who were not doing Apple business but were there to take a forehead temperature. We put our name in and explained that we wanted to return this machine and to get another iMac today.

After waiting for about half an hour, we were approached by a young man who handled the return. The return process was pretty clean and easy and was completed in 5-10 minutes.

He was personally a little prickly, maybe because he was surprised. (Who in their right mind wants to return an Apple anything, ever?)

Well, this was one of those times, and it was for cause – a substantial technical failure by inadequate capabilities of a new machine, which was much slower than his current 7-year-old machine.

He was mildly contemptuous that anyone might say Apple wasn’t great. We again asked him to process the return because this product is not being kept and we’re getting it done on day 14 – within the 14-day return policy.

After he received the return, we began to talk about getting a replacement computer. Long story short: the Apple Store only had iMacs with physical hard drives in them. If we wanted a Solid State Drive in the computer, it would have to be ordered from Apple Corporate, and it would take about two weeks to arrive. (This was in mid-August.) The Apple employee could not receive that order. We would need to order it online.

We left, placed an online order with Apple Corporate, and the new Apple computer arrived about 10 days later. The new iMac performs impressively well, and the customer is delighted.

The picture below is for a different machine than the story above. It was purchased at the end of September 2020 and shows the estimated arrival time 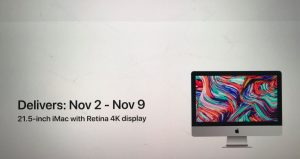 is Nov 2 – Nov 9. Now, four to five weeks is a long time to wait so that you don’t get a physical hard drive in your new iMac. (Apple and other manufacturers are delayed in shipping machines.)

The customer called back the next morning, saying that he had talked with his family in Denver. They had found the exact same machine that he had ordered at a local technology store. He could get it today! I walked him through the important points to make sure it really was the same machine.

He talked with his family, and no, the store did not have the computer with the better equipment which /is/ necessary. He will continue to wait a month for the new machine to arrive.

Make sure that your Mac comes with a “Flash Drive” which is a full Solid State Drive (SSD). Do not get a “Fusion Drive,” which is a large Physical Hard Drive with a small Solid State Drive, which acts as a cache. The performance increase is poor. Do not get a Physical Hard Drive because it is /much/ slower than an SSD. Spend the money. Take the longer view. Get an SSD.

Three: How to Purchase

The current delay time (in September 2020) for ordering a new iMac from Apple Corporate is 4-5 weeks. IMHO: take the longer view, order the machine with the better features you actually want, bite the bullet, and wait for it to arrive.

But lately, I find that Apple has begun to cut corners on what they put into their computers. I see slow processors which are several generations old. I’ve also seen physical hard drives into the computer rather than a “Flash Drive” – which is also known as a Solid State Drive.

Computers are one of those “you get what you pay for” kinds of things. The Apple Premium is alive and well and has been for years. Apple offers discounts to no one. A recent customer wanted a new iMac. He is a long-term professor at the local University. Apple offered him an Academic Discount of $50. (FYI, We get 35-50% discounts from Dell and a lower discount from other manufacturers. We always pass that discount on to our customers.)

If you need help navigating the process of getting a new Mac or PC, please let us know. This is just one of the services that we offer. And, if you’re wondering how to set up a new Apple computer, we can help with that as well.

Watch Out For Phone, Text, Email, and Other Scams:

Chris Eddy of Geek For Hire, Inc. has provided computer service to families and small businesses with Mac’s and PCs for the past eighteen years. Angie’s List and the BBB rate Geek For Hire very highly.  You can find more on our website, or give us a call at 303-618-0154. Geek For Hire, Inc. provides onsite service (Tier 3 support) to the Denver / Boulder / Front Range area and remote service throughout North America. We provide Apple & Mac computer repair onsite or remotely.