When I mention what I do to new acquaintances, I get this question a lot: What Is Wrong With My Multi-Function Printer?!  A major problem with printers these days is that they are designed to be disposable, a throw-away appliance.  The cheaper ones might only last for a year. Even the more expensive ones break down.  Then it could be more cost-effective to get a new one rather than trying to get it fixed.

What Is Wrong With My Multi-Function Printer?!

Here are some common printer problems:

If you have a paper jam, the first thing to do is to pull out the paper tray. Sometimes the paper is stuck just as it comes out of the tray. You can also try this: carefully open up your machine and turn all the knobs and wheels that move the paper forward. If you can see where the paper is stuck, carefully give the paper a little tug to see if you can pull it out. If it feels like it might start to tear, stop pulling. Continue moving the knobs and wheels until the entire piece of paper has been removed. In rare cases, the jam is so severe that you cannot remove the paper.  Sometimes trying to remove the paper can bend some of the metal wires.   In that case, it’s probably time to look for a new printer.

Sometimes, with both Mac and Windows machines, your computer will take an upgrade overnight which then requires a new software printer driver for your printer.   Go to your printer’s website – Hewlett Packard, Dell, Brother, etc. – and download the new software. Once you have downloaded and installed the software, your printer should work again.  Call us if you need help. 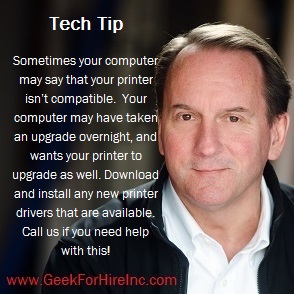 If your computer suddenly can’t find your wireless printer, somehow the printer lost its connection to the Wi-Fi router.  Turn both your computer and printer off and on again.  If that doesn’t work, input your Wi-Fi code into the printer control panel and you should be good to go. 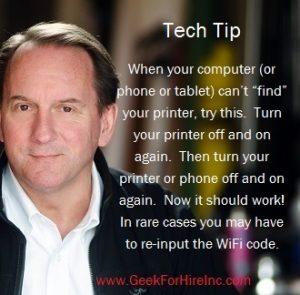 Your printer tells you it is time to replace the cartridge.  You install the new one and still get the same error message!  This is most likely because the ink dried inside the printer nozzles.  This happens when you haven’t used your printer in a while.  If you still have a warranty on the printer, take it in to see if they can repair it.  They may decide to replace it.  If you routinely go a week or more without using your printer,  consider replacing it with a laser printer.

What do you look for in a new printer? Check out our Buyers Guide to see what your options are.

Of course, we can help you with your printer issues.  Give us a call and give me a run-down of the symptoms.  Do I think we can fix it in a reasonable amount of time?  I’ll let you know before we schedule an appointment.  If not, I’ll let you know that it’s probably time for a new one.

Please forward this to your colleagues who ask you: What is Wrong with my Multi-Function Printer?

Chris Eddy of Geek For Hire, Inc. has been providing computer service to families and small businesses with Mac’s and PCs for the past eighteen years. Angie’s List and the BBB rate Geek For Hire very highly.  You can find more on our website, or give us a call 303-618-0154. Geek For Hire, Inc. provides onsite service (Tier 3) to the Denver / Boulder / Front Range area as well as remote service throughout North America.